Monkeys can still learn voluntary behavior from visual cues even if they are not aware of the cues. 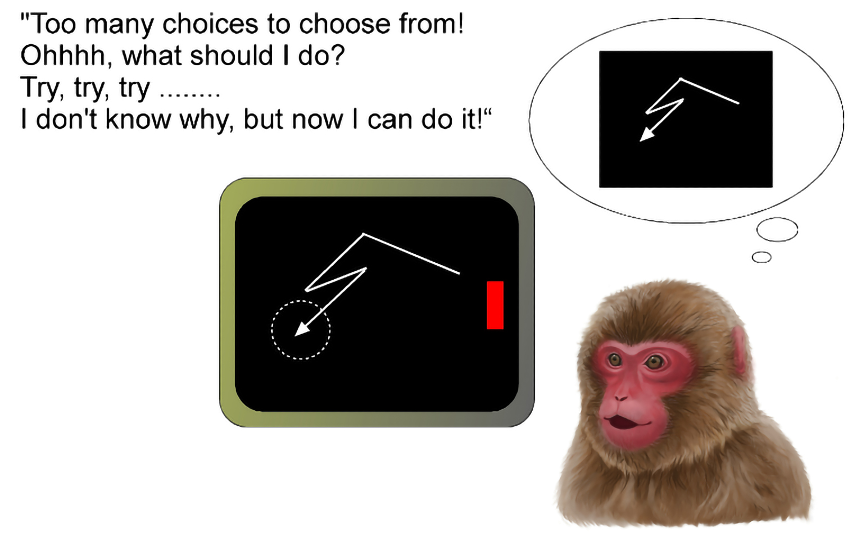 The visual cortex makes up one of the largest regions of the brain, which is a testament to how much information we receive from our eyes. The primary visual cortex, or V1, is the first stage of processing visual input in the brain. Without a functional V1, a person is oblivious to an object that their eyes receive the visual input. However, scientists are in disagreement about whether we must be conscious of what we receive a visual input in order to learn from it. A new study in Scientific Reports by researchers at ASHBi and the University of Sheffield suggests that even if monkeys do not realize they have received a visual signal, they still change their behavior using it.

The loss of the V1 does not mean they do not respond to a visual object, as explained by blindsight, a condition first defined about 50 years ago, in which patients do not consciously detect a visual stimulus but nevertheless localize the target by eye movements or hand reaching. In other words, in blindsight, individuals use visual information of the object but are unaware that they do. Then, to what extent is it possible to act independently of consciousness?

To test this question with regards to blindsight, ASHBi Professor Tadashi Isa, Dr. Rikako Kato and colleagues lesioned V1 in one hemisphere of two monkeys and had them conduct a hidden area search task. In this task, the lesioned monkeys were required to identify the hidden area within a blank screen. When their eyes located the hidden area, a visual signal appeared informing them the area had been discovered, and the monkeys were rewarded with a drop of juice after two seconds delay.

The experiment was designed so that in some cases the visual signal would appear to the intact V1 side and in others it would appear to the lesioned side. The study shows that regardless of the side, the monkeys still identified the hidden area and received the reward.

Moreover, the findings suggest that oculomotor behavior after visual cue presentation can be an indicator of confidence. When the confirmation feedback signal was shown to the intact V1 side, the monkeys were certain that they had found the hidden area, as demonstrated by the stopping of searching movements. In contrast, these searching saccadic movements continued when the confirmation signal was shown to the lesioned side.

Dr. Rikako Kato believes deeper study of the brain regions and neural pathways will go beyond understanding the human brain.

“By clarifying the neural mechanisms of learning voluntary behaviors in conscious and unconscious states, we can elucidate human brain functions and apply it to artificial intelligence.” she said.