Sculpting the Human Body Plan in a Dish 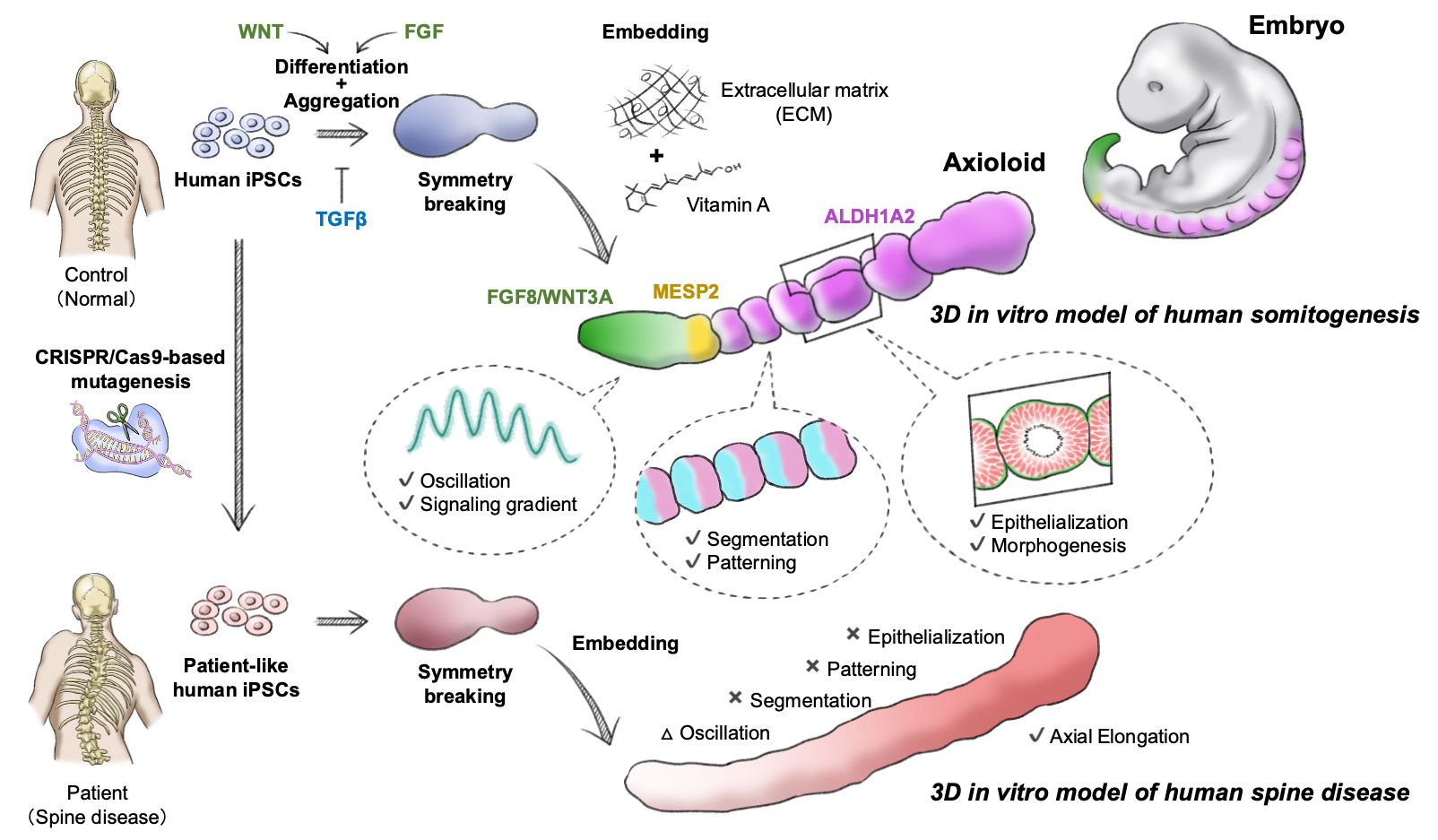 KYOTO –December 21 2022– Although Michelangelo’s masterpiece David captured the magnificence of the human body – how this exquisite body plan is exactly established during human development has puzzled scientists for more than a century. This has been largely due to technical limitations and ethical concerns associated with using human embryos in research.

However, now, work published in Nature by an international team of scientists led by Dr. Cantas Alev, at the Institute for the Advanced Study of Human Biology (ASHBi) in Kyoto University, have uncovered using their own mallet and chisel –a petri dish and induced pluripotent stem cells (iPSCs)– how the early stages of the human body plan are established.

Similar to other organisms within the animal kingdom, the human body consists of repetitive anatomical units or segments – a prominent example being the vertebrae of the human spine. The most primitive version of such segments in the human embryo, known as somites, arise from an embryonic tissue called presomitic mesoderm (PSM), and contribute to the formation of various structures including cartilage, bone, skin and skeletal muscle. While previous work by Alev and colleagues reconstituted the so-called segmentation clock, a molecular oscillator and dynamic ‘wave’ of gene expression required for the proper formation of human somites (somitogenesis), it could not recapitulate the complex three-dimensional (3-D) morphological and structural changes occurring during human body-axis development.

In their new study, Alev and co-workers, using a cocktail consisting of human iPSCs-derived cells and Matrigel –a viscous gel compound enriched with extracellular matrix components– have now generated a 3-D model that can recapitulate the development of our early body plan in a dish, which they coined ‘axioloids’.

“(Our) axioloids capture, not only the oscillatory nature of the segmentation clock, but also the molecular as well as the 3-D morphological and structural characteristics observed during the process of segmentation and somitogenesis” says Alev.

By taking a bottom-up approach in their experimental design, Alev and his team identified a previously unappreciated functional role for retinoids, more commonly known as vitamin A and its derivatives, during somite formation. “Our bottom-up approach was critical to unravelling the role of retinoids during somitogenesis. It is likely that many researchers missed this essential role because vitamin A is a common supplement that usually gets included into culture media” comments Alev.

When Alev’s axioloids were compared to actual human embryos, they revealed “remarkable similarities to Carnegie Stage 9-12 human embryos, which is known to be a critical stage during human development where organs such as the brain and heart start forming” explains Alev.

Lastly, using iPSCs containing mutations commonly associated with congenital spine disease, Alev and co-authors demonstrated that axioloids can be instrumental in delineating how these mutations contribute to the pathogenesis of such diseases.

Alev comments, “our (bottom-up) approach of generating axioloids have not only allowed us to uncouple fundamental biological processes, such as cell morphology and cell states, but it allowed us to determine how mutations contribute to spine disease” and he continues, “we also anticipate similar strategies will become increasingly necessary in order to understand better the etiology and pathology of other diseases.”

These findings, together with another complementary study from researchers at Harvard Medical School, were published in Nature on December 21, 2022.