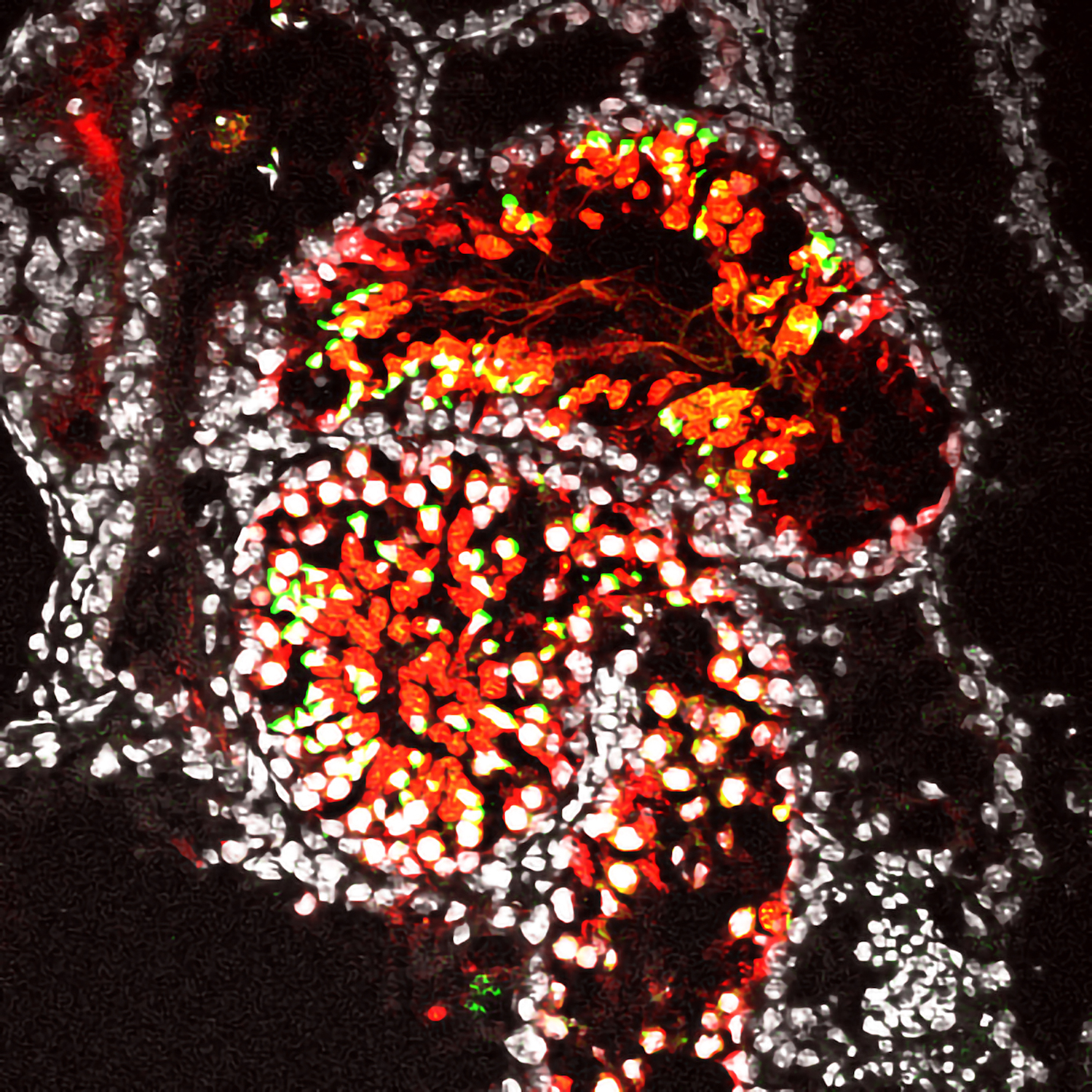 For species that rely on sexual reproduction, including mice and men, offspring can only happen if sperm from the male fertilize eggs from the female. Even artificial fertilization techniques depend on donors for both of these cells. However, a new study led by ASHBi researchers shows that mouse pluripotent stem cells can differentiate into functional sperm. These sperm were successfully used to produce healthy, fertile offspring and provide the most comprehensive model yet for generating male germ cells in a test tube.

Pluripotent stem cells have allowed scientists to study how each and every cell in the body is formed. Brain cells, heart cells, and livers cells are just some examples of the cell types made from these stem cells and now being used in patients as experimental cell therapies. However, some cell types remain difficult to make from pluripotent stem cells, particularly sperm cells.

Furthermore, they are the only cells that parents actually pass to their offspring, which makes them, according to ASHBi Director Mitinori Saitou, one of the authors of the study, “the driving force that sustains and evolves a species.”

Although more research is needed, scientists have made significant strides in producing sperm cells from pluripotent stem cells, at least for mouse. The process is generally broken into three stages that mimic natural development. First, the stem cells are differentiated into primordial germ cells, then into spermatogonia stem cells, which is when the male sex is determined, and finally sperm.

Spermatogonia stem cells are what allow the male to produce sperm for a lifetime, but this second stage has proven to be the most difficult to recreate in the laboratory.

Difficult, but not impossible. Mouse spermatogonia stem cells can be made, but inefficiently, which is why Dr. Yukiko Ishikura, another contributor to the study, concluded that optimizing the differentiation process was needed.

“The differentiation rate is about one week slower than in the mouse body and the contribution of the spermatogonia stem cells to spermatogenesis is low,” she said.

Beginning with mouse pluripotent stem cells, she and colleagues prepared primordial germ cells and examined over 10000 of them in 8 different conditions using what they call a “new reconstituted testis method”.

To validate the best conditions for manufacturing spermatogonia stem cells, they confirmed that the cells shared several properties with those in mouse testis, including the expression of key genes, epigenetics, and the transient upregulation of retrotransposons, which Saitou was especially unexpected.

The identical epigenetics was also crucial. While genes are made of DNA, their expressions depend on epigenetic factors like DNA methylation. Germ cells show distinct DNA methylation patterns during their development, patterns that are considered crucial for their ability to produce offspring.

To confirm the spermatogonia stem cells behaved just as those produced in the body, the researchers injected their laboratory made spermatogonia stem cells into mouse testes, where the cells were allowed to develop into spermatids. These spermatids were harvested and injected into eggs to grow embryos. The embryos were then used to impregnate mice, which went on to give birth to healthy offspring that were also fertile.

The findings provide the most comprehensive reconstitution of male germ cell development yet starting from pluripotent stem cells.

“This is the first study to reconstitute functional sperm from mouse pluripotent stem cells in a test tube. This open new possibilities for male germ cell differentiation,” said Saitou.

We show that we have succeeded in reproducing the entire differentiation process of male germ cells from mouse pluripotent stem cells in vitro.Top: scheme for male germ-cell development in mice. Bottom: scheme for the in vitro reconstitution of male germ-cell development by pluripotent stem cells. E, embryonic day; P, postnatal day.
Provided by Yukiko Ishikura, a postdoctoral researcher at ASHBi Kyoto University