How to make up your mind when the glass seems half empty? 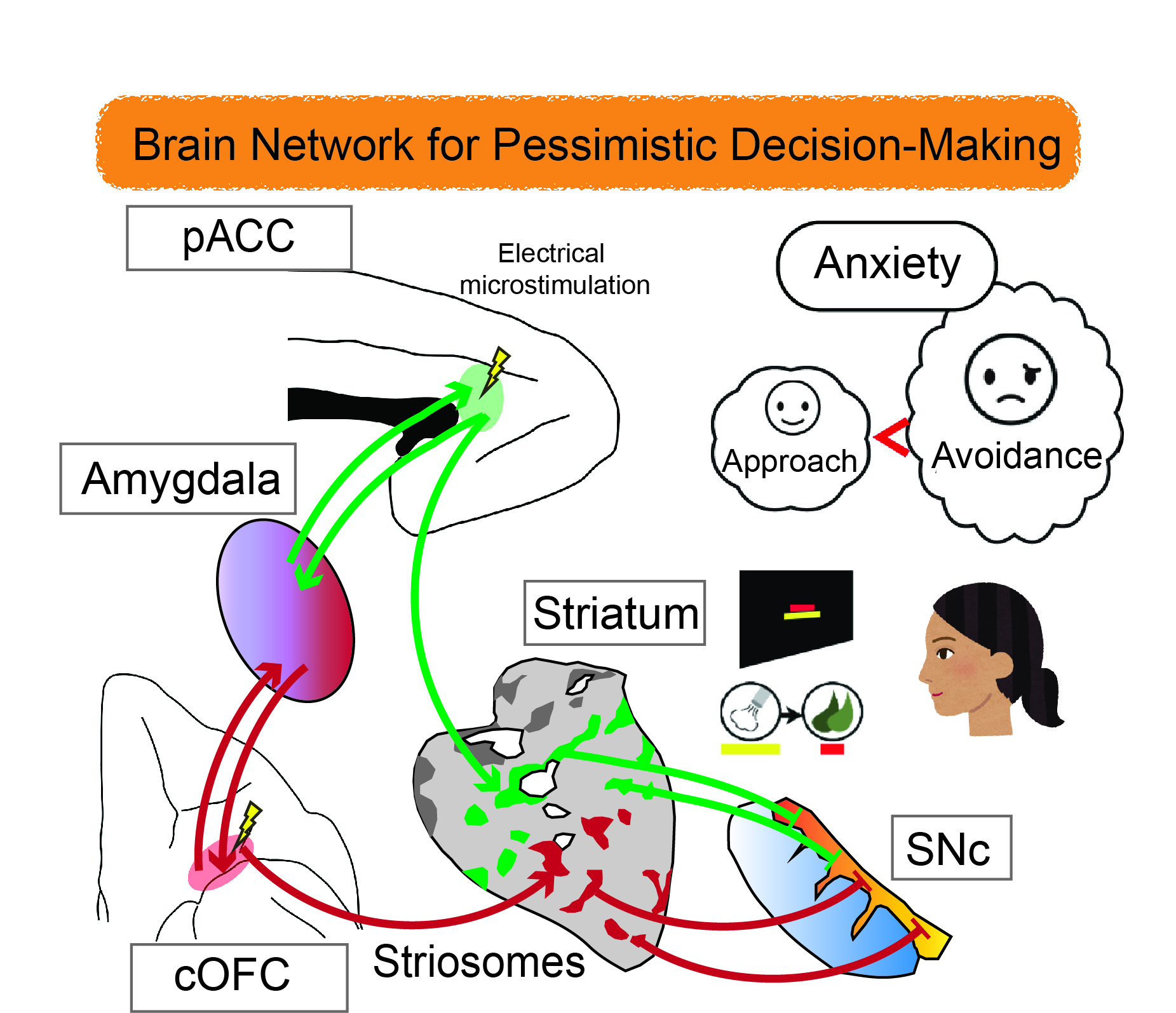 Is a new high-income job offer worth accepting if it means commuting an extra hour to work? People often have to make tough choices regarding whether to endure some level of discomfort to take advantage of an opportunity or otherwise walk away from the reward. In making such choices, it turns out that the brain weighs our desire to go for the reward against our desire to avoid the related hardship.

In previous research, negative mental states have been shown to upset this balance between payoff and hardship toward more ‘pessimistic’ decision making and avoidance. For example, scientists know that people experiencing anxiety have a stronger-than-normal desire to avoid negative consequences. And people with depression have a weaker desire to approach the reward in the first place. But there is still much we do not know about how the brain incorporates feelings into decision making.

Neuroscientists at Kyoto University’s Institute for Advanced Study of Human Biology (WPI-ASHBi) have connected some of the dots to reveal the brain networks that give anxiety influence over decisions. Writing in the journal Frontiers in Neuroscience, the group has published a review that synthesizes results from years of brain measurements in rats and primates and relates these findings to the human brain.

“We are facing a new epidemic of anxiety, and it is important that we understand how our anxiety influences our decision making,” says Ken-ichi Amemori, associate professor in neuroscience at Kyoto University, ASHBi. “There is a real need for a better understanding of what is happening in the brain here. It is very difficult for us to see exactly where and how anxiety manifests in humans, but studies in primate brains have pointed to neurons in the ACC [anterior cingulate cortex] as being important in these decision-making processes.”

Thinking of the brain as an onion, the ACC lies in a middle layer, wrapping around the tough ‘heart’, or corpus callosum, which joins the two hemispheres. The ACC is also well-connected with many other parts of the brain controlling higher and lower functions with a role in integrating feelings with rational thinking.

The team started by measuring brain activity in rhesus macaques while they performed a task to select or reject a reward in the form of food combined with different levels of ‘punishment’ in the form of an annoying blast of air in the face. The potential choices were visually represented on a screen, and the monkeys used a joystick to make their selection, revealing how much discomfort they were willing to consider acceptable.

When the team probed the ACC of the monkeys, they identified groups of neurons that activated or deactivated in line with the sizes of the reward or punishment on offer. The neurons associated with avoidance and pessimistic decision-making were particularly concentrated in a part of the ACC called the pregenual ACC (pACC). This region has been previously linked to major depressive disorder and generalized anxiety disorder in humans.

Microstimulation of the pACC with a low-level electrical pulse caused the monkeys to avoid the reward, simulating the effects of anxiety. Remarkably, this artificially induced pessimism could be reversed by treatment with the antianxiety drug diazepam.

With knowledge of the pACC’s involvement in anxiety-related decision-making, the team next searched for its connections to other parts of the brain. They injected viruses at the specific sites that instructed nerve cells to start making fluorescent proteins that would light up under microscope observation. The virus then spread to other connected nerve cells, revealing the pathways other areas of the brain linked to this center of ‘pessimistic’ thought.

The team found interconnections with many parts of the prefrontal cortex at the front of the human brain, which is associated with higher cogitative function and reasoning. They also noted a strong connection with labyrinth-like structures known as striosomes.

Amemori explains, “The function of the striosome structure has been something of a mystery for a long time, but our experiments point to these being an important node linking pessimistic decision-making to the brain’s reward system and dopamine regulation.”

The team noted a further connection, namely that between these striosomes and another more distant region, the caudal region of the orbitofrontal cortex (cOFC) at the front of the brain. This part is also known to be involved in cognition and decision-making.

When the team repeated their brain monitoring, microstimulation, and virus tracing studies in cOFC, they found a very similar influence on the monkey’s tendency toward pessimistic decision making. Curiously, the pACC and the cOFC also shared many of the same connections to other parts of the brain.

The team was able to generalize these findings in primates to humans by drawing comparisons with the body of knowledge in human brains studies based on magnetic resonance imaging or MRI.

Amemori says, “The many parallels in brain activation point to a common mechanism for both humans and monkeys. It’s important that we have associated striosomes and their extended network with decision making under an anxious condition, and we hope that this study will be useful toward developing brain pathway-specific treatments for neurological and psychiatric disorders in humans.”