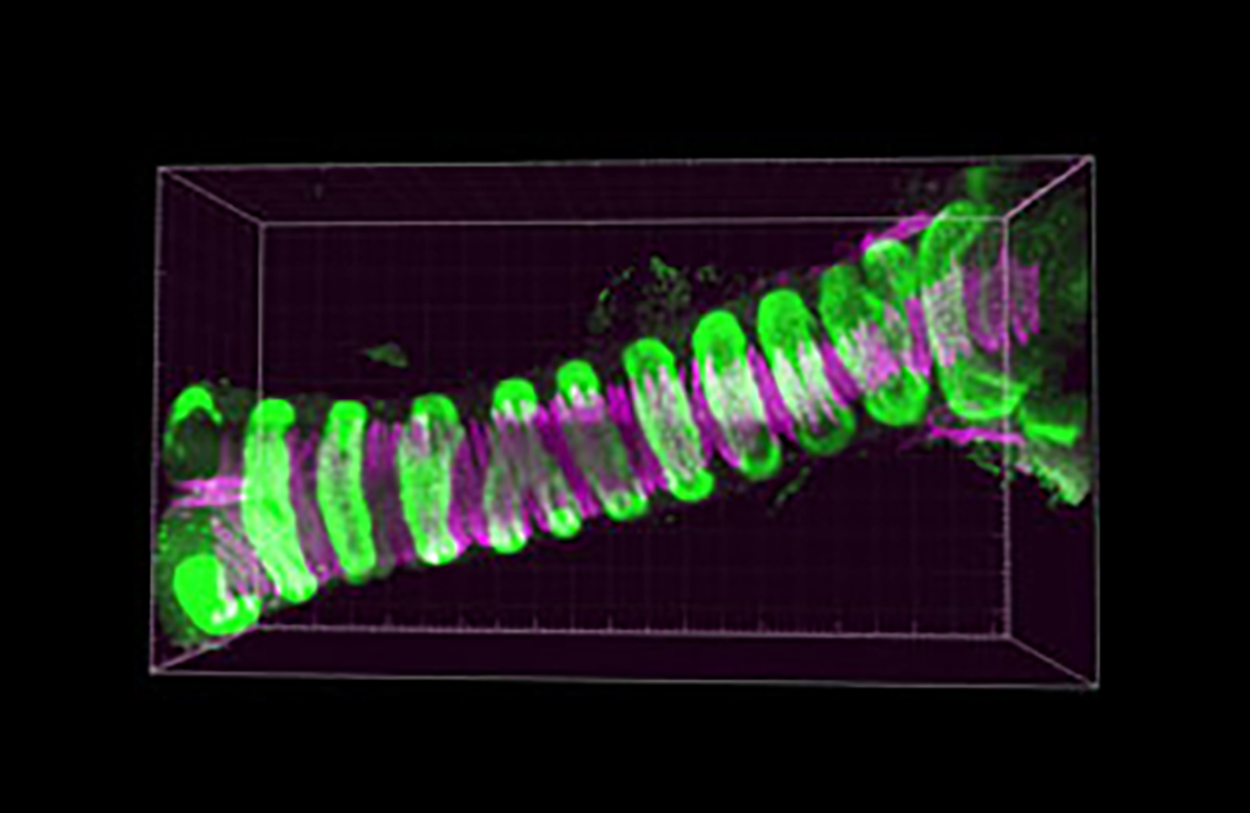 A fluorescence micrograph of a trachea from a mouse, showing the two main components of the trachea: cartilage (green) and smooth muscle (magenta). © 2020 RIKEN Center for Biosystems Dynamics Research

Insights that could help to find new ways to repair birth defects affecting the windpipe have been obtained by a RIKEN-led study into the molecular mechanisms that initiate windpipe formation during embryonic development in mice and humans1.

From our earliest moments of life, our survival depends on the proper development of a functional respiratory system.

The windpipe, or trachea, is formed through the interplay of two embryonic tissues: the endoderm and the mesoderm. Previous work by Mitsuru Morimoto and his colleagues at the RIKEN Center for Biosystems Dynamics Research had showed that a subset of mesodermal cells secretes signals that establish the length and diameter of this tubular structure. “But it was unclear how this tracheal mesodermal development is initiated,” says Keishi Kishimoto, a researcher in Morimoto’s lab. “We thus sought to uncover this mechanism and generate tracheal mesoderm in a dish.”

The researchers examined the activity of a set of genes that had previously been associated with airway development. Their analysis revealed how crosstalk between endodermal and mesodermal tissue during the second week of mouse embryonic development stimulates the expression of a gene called Tbx4 in the mesoderm. Tbx4, in turn, is a critical factor in establishing the identity of the mesodermal cells that will ultimately form the trachea.

Based on these findings, Morimoto’s team developed an in vitro model of this process based on embryonic stem cells, which can potentially give rise to any tissue in the body. Using a hand-picked recipe of signaling molecules, they were able to reproducibly reprogram both mouse and human embryonic stem cells into Tbx4 -expressing tracheal mesoderm cells. These cells subsequently matured into both smooth muscle and cartilage—the two main constituents of the windpipe.

This study reveals important missing steps in tracheal development. Morimoto notes that many groups have sought to replicate this tissue in vitro with simplified ‘organoid’ models, but these have generally fallen short until now. “Previously reported organoids lacked this mesoderm population,” he says. “The procedure identified here can thus lead to a more biologically accurate model.”

Progress in organoid development could also have important clinical implications. Morimoto notes that some newborns exhibit life-threatening malformations of the trachea, which arise from disorders that are poorly understood and difficult to treat. A sufficiently sophisticated organoid system could offer both explanations and potential therapeutic options for these conditions. “Accurate tissue replacement would be the ultimate strategy to repair such malformed tissues,” says Morimoto.